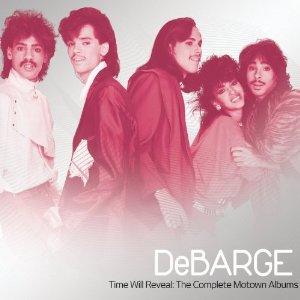 DEBARGE were one of Motown’s great success stories of the 80s. The family band (brothers EL, RANDY, MARK and JAMES along with sister BUNNY) released their first album in 1981 and for the next four years they became chart mainstays. Though their music (an infectious mix of tender ballads and frothy dance tunes) has remained popular, the group’s four Motown albums have long been out of print, thwarting both fans and collectors

Now, though, the problem’s been solved as Universal – via their Hip-O Select imprint – reissue all four LPs in one beautifully packaged and accurately annotated set – ‘Time will Reveal; The Complete Motown Albums’. The 1981 ‘DeBarges’ and ’82’s ‘All This Love’ LPs fill the pack’s first CD while ‘In a Special Way (1983) and ‘Rhythm Of The Night’ (’85) take care of the second disc.

Collectors though will treasure the set’s third CD. This contains 10 cuts – a mix of remixes and rarities. Five of them are previously unreleased and consist of an alternative version of ‘All This Love’ along with four instrumentals. The whole thing’s packed with highlights including STEVIE W’s delightful harmonica input to ‘Love Me In A Special way’ and – as with all Hip-O Select product – there’s great art work, annotations and a career overview.