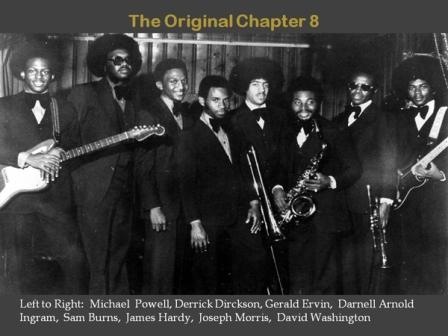 Soul people will know DAVID WASHINGTON as a founder member of the legendary Detroit group, CHAPTER 8. DAVID founded the group with MICHAEL POWELL in the late 70s and the band recorded three acclaimed long players including the still-wonderful ‘This Love’s For Real’.

POWELL and WASHINGTON were also, of course, responsible for breaking ANITA BAKER into the big time. The petite songstress had fronted the Detroit band, OSMOSES before being drafted into CHAPTER 8 in 1978. When she left, bassist WASHINGTON and guitarist POWELL continued to work with her along with the likes of REGINA BELLE and DAVID PEASTON.

Since then DAVID WASHINGTON has worked with THE DETROIT EMERALDS, THE FANTASTIC FOUR, JOE SIMON, SAM and DAVE and the mighty DELLS as well as being part of the band, QUAZER.

At the start of the millennium, DAVID turned his back on music and started up a pest control business before going back to college – winning a degree in IT. He and his wife JEANNINE moved to Japan and set up a business but after the devastating tsunami, they returned to the States and DAVID went back into the studio. He re-recorded the CHAPTER 8 classic ballad ‘Ready For Your Love’ – on which he duets with KATRINA JOHNSON; then he laid down his own version of the song he’d written for JIMMY SCOTT – the lovely, mid-tempo ‘Games’.

UK soul specialist label SOUL JUNCTION has picked up both tracks and has just issued them as a 7″ vinyl single, with the ultra-catchy ‘Games’ as the featured A –side. Riding a tight groove, the tune will please modern soul fans everywhere. It’s eminently danceable and has enough retro touches to satisfy the most conservative of soulies… great vocal too. The slow ‘Ready For Your Love’ has always been a classic ballad and the new tweak is every bit as good as the original version.

DAVID WASHINGTON’S Games/Ready For Your Love is out now on SOUL JUNCTION RECORDS – find out more @ www.souljunctionrecords.co.uk