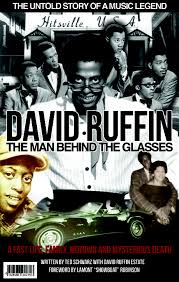 Fans of the Temptations in general and DAVID RUFFIN in particular will be delighted to learn that a new biography on one of soul’s finest is all set to be published. The book, ‘The Man Behind The Glasses’ is a collaboration between Ruffin’s family and estate and music writer Ted Schwarz. Ruffin’s daughter Cheryl says: “The book will reveal some truths that many never knew about my father through the eyes of family members and close friends – like how he loved to cook and eat; his love for my mother Sandra Ruffin and how they talked about getting back together before he died.”

The book will also reveal why to many Ruffin (who would have been 73 in January) appeared a troubled soul. For instance, he was deeply affected by the death of his childhood friend – civil rights activist James Chaney who was murdered in 1964. Chaney was brutally killed in Mississippi (near Ruffin’s then segregated home town) along with two other activists; their remains were not located until 44 days later.

On a brighter note the book will also shed new light on the joyous music David made both with the Temptations and on his own.

In conjunction with the announcement of the publication of the biography, the Ruffin family has announced that they will launch an “Official David Ruffin Website” www.davidruffin.net.