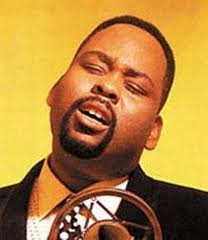 Soul singer DAVID PEASTON died on February 1st. He was 54 years old and news agencies report that the cause of death was medical complications caused by his diabetes. PEASTON was born in St Louis in 1957 and was part of an important soul and gospel dynasty… his mother, MARTHA BASS was a member of the CLARA WARD SINGERS and an acclaimed performer in her own right while his sister FONTELLA BASS has enjoyed an equally distinguished soul and gospel career.

Originally a schoolteacher, PEASTON relocated to New York in 1981 where, after appearing at the famous Apollo Theatre talent shows, he became a resident on the syndicated TV show, ‘Showtime At The Apollo’. He made his recording debut in 1989 with the wonderful ‘Introducing…’. The follow up, ‘Mixed Emotions’ was equally soulful and critically well-received but PEASTON’S career never really took off….possibly because of his problems with diabetes, which eventually meant the amputation of both his legs. DAVID PEASTON is survived by his wife MARYLYN and two sons.

February 1st saw the passing of another important figure in the Soul world – music entrepreneur, DON CORNELIUS. CORNELIUS, best known for creating the iconic ‘Soul Train ‘TV show, was found dead at his home in Sherman Oaks. Police had been called to the house and when they arrived in the early hours of the morning they found CORNELIUS with a self-inflicted gunshot wound. Though the LA Police Department are investigating, they say there were no signs of foul play.

‘Soul Train’ was arguably America’s most important TV soul show and was responsible for giving exposure to black artists at a time when it was difficult for such artist to break into the mainstream. At the time of his death, CORNELIUS was 75 and working on a movie based around the ‘Soul Train’ show.