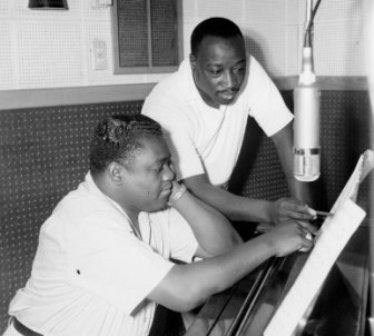 Just weeks after the death of Dr John, New Orleans is mourning the passing of another major musical icon. Producer, arranger, composer, trumpet player and bandleader DAVE BARTHOLOMEW died on Sunday 23 June in New Orleans at the magnificent age of 100. One of the leading creators of the New Orleans sound and best remembered for his work with Fats Domino, Dave’s death was announced by his son Ron.

Dave Bartholomew was born on December. 24, 1918, in Edgard, Louisiana. His father played trumpet and Dave learned to play the tuba before moving on to trumpet earning the nickname Leather Lungs for his ability to hold a note. He played in various local bands and after serving in World War II he formed his own group, which appeared in New Orleans night spots like the famous Dew Drop Inn where he met record biz hustler Lew Chudd, who signed him to his label, Imperial. Working as a sort of talent scout, Bartholomew saw and signed Fats Domino to the label and the pair went onto enjoy a string of successes. The collaboration yielded 65 Billboard single hits between 1955 and 1964 – only Elvis Presley enjoyed more success!

He worked with other artists too – people like Lloyd Price, Smiley Lewis, T Bone Walker and Chuck Berry whilst major stars (including, Elvis, the Rolling Stones and the Beatles) have covered his songs. His work was also hugely popular across the Caribbean and is often cited as being a seminal influence on the evolution of ska and reggae.

Dave was inducted into the Songwriters Hall of Fame in 1998, and was also a member of the Rock and Roll Hall of Fame and the Louisiana Music Hall of Fame. He was given a Trustees Award for lifetime achievement by the Recording Academy in 2014.

Our picture (above) shows Dave at work with Fats Domino.