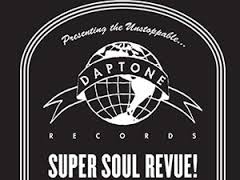 One of the best things to happen to real soul music in the last several years has been the emergence of the whole Daptone Empire. Burning out of Brooklyn, artists like Sharon Jones, the Dap-Kings, Charles Bradley, his Extraoridnaires and the Sugarman 3 have revitalised old school soul and funk.

All the Daptone crew, of course, have toured regularly, playing to full, enthusiastic audiences but now the whole team have come together to present an old school soul revue in the manner of those classic 60s Motown and Stax tours. The line-up for the revue is Sharon Jones & the Dap-Kings, Charles Bradley and his Extraordinaires, Antibalas, The Sugarman 3 with special guests Saun and Starr and Master of Ceremonies Binky Griptite.

Jones and Bradley need no introduction – acknowledged soul powerhouses both; the Sugarman combo offer the best of soul-jazz; Saun and Starr are emerging soul stirrers while Antibalas are an up-coming Afrobeat ensemble and Griptite is one the brains behind the whole magical Daptone sound. Total soul excitement is guaranteed when the crew hit Europe in the summer…… the dates are as follows