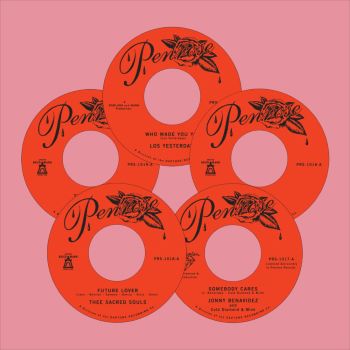 Our fine friends at DAPTONE RECORDS have told us that they’re lining up a February release of five very tasty soul singles on their PENROSE imprint.

First up there’s a 7” on one of the label’s best known bands, THE SACRED SOULS . Their 45 pairs two tracks from their acclaimed eponymous debut LP, ‘Future Lover’ and ‘For Now’. Proper soul  fans will be familiar with the songs, They were standouts on the album. But to remind you, ‘Future Lover’ is a classic beat ballad with retro call and response harmonies. ‘For Now’ is more sombre but equally heart-tugging.

THE  ALTONS are a new group to Daptone/Penrose but their 45 perfectly suits the label’s catalogue. The girls’ offerings are  ‘Float’ – a big, immersive  building ballad reminiscent of the music of the Brill Building and ‘Cry For Me’ a breezier song altogether with a subtle Latin undertow. Adrian Flores’ vocal is soulfully pleading  while the hook is a real ear worm.

The third new 45 features two tracks  from VICKY TAFOYA. Her two tracks are ‘Love Don’t Treat You Fair’ and ‘The Moment’. Both have a smouldering Southern soul feel with bluesy undertones. Little wonder critics have made comparison between Vicky and  Etta James. Praise indeed but the proof’s in these  two outings. ‘Love Don’t Treat You Fair’ explores the nature of despair while ‘The Moment’ has that special country soul feel that studios like Fame and American delivered with ease.

JONNY BENAVIDEZ is a new name to Daptone/Penrose and his two cuts come via a collaboration with Finland’s’ Timmion Records, through Mr B is actually from San Diego but now works out of New York. Jonny, we’re told, is a big fan/collector of 60s vocal harmony groups and that’s evident as soon as the needle drops on the disc’s putative A side ‘Somebody Cares’ – a mid-tempo mover with the sweetest of sweet harmonies. ‘Slow Down Girl’ , despite its title, is more up tempo and reminds me  of much loved groups like the Esquires. Two great tracks.

Last and certainly not least is a 45 from LOS YESTERDAYS (above). The top side is a dark ‘Who Made You’ which features a moving, gritty  vocal from Victor Benavides supported  by sweet harmonies. The flip, however,  is something to really behold… a cover of the rock/soul staple, ‘Louie Louie’. The Kingsmen classic has been covered hundreds of times, but I guarantee that you’ll have never heard a cover quite like this. On first hearing you wouldn’t think it was the same song… but it is! The band slow it right down, giving it a proper Low Rider vibe… falsetto lead and soaring, support harmonies. Lovely and just what a cover should be – a re-creation of the original.

All five of these  singles will be officially available from February 24th but are good to pre-order right now. Learn more @ https://daptonerecords.com/