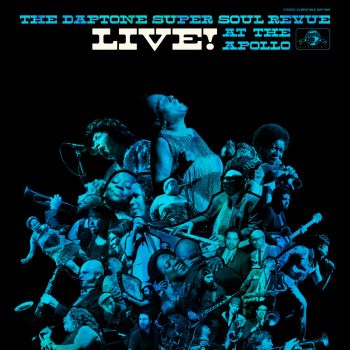 The wonderful DAPTONE label is celebrating its 20th anniversary this year. Yep, hard to believe that it was way back in 2001 that Gabriel Roth (Bosco Mann) and Neal Sugarman hit on the idea of the new label after the closure of Desco Records. Part of the idea was to provide a home for Sharon Jones and the Sugarman 3 and the rest – as they say….

To celebrate the big 20th Daptone will be releasing a super soul revue live album recorded at Harlem’s famed Apollo Theatre (did someone mention James Brown recorded a seminal live set there too?). The LP is set for release on October 1st and features performances from people like Charles Bradley, Sharon Jones & the Dap-Kings, Naomi Shelton, Antibalas, The Budos Band, Menahan Street Band, Sugarman 3, Saun & Starr and the Como Mamas. Dap King, Binky Griptite is the MC and a splendid time is guaranteed for all. The live performances were recorded between 4th-6th December 2014. Since then of course, Sharon Jones, Charles Bradley, Naomi Shelton  and  Cliff Driver have all sadly died. So in many ways this album is noy just a Daptone celebration but also a wonderful tribute those artists.

As a sort of taster, the label has issued three singles from the set … ‘Introduction’ by Binky Griptite – and The Dap-Kings,  ‘Let Love Stand a Chance’ by Charles Bradley and ‘Get Up and Get Out’ by Sharon Jones & the Dap-Kings.