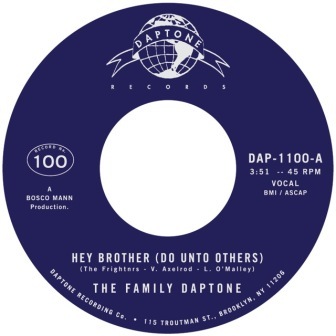 Hard to believe but the small but perfectly formed DAPTONE RECORDS have released 99 singles! For their 100th release the House Of Soul is set to offer something really special – a double A sided star studded affair!

One side of the 45 is an instrumental jam, ‘Soul Fugue’ by the “100 Knights Orchestra” – in reality a massive ensemble comprised of every horn player the label has ever worked with. They all crammed into the studio simultaneously to perform the epic composition composed and arranged obsessively by head boy Bosco Mann; we’re told the tune is based on the Fibonacci series and the number 100… there you go!

The 150th single’s “other side” is ‘Hey Brother’ … a song written by The Frightnrs and originally performed on their acclaimed LP, ‘Nothing More to Say’. Daptone decided to record the song after the death of that band’s lead singer Dan Klein. Vocals come via Charles Bradley, Sharon Jones, Naomi Shelton, Amayo (Antibalas), and Saun & Starr and, sadly, Mann sees the cut as tribute to Bradley and Jones too.