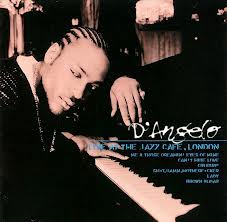 Back in the mid 90s, D’ANGELO was THE man. Hailed as soul’s saviour, he was crafting an intoxicating new sound that paid respect to the past but pushed the boundaries into exciting new areas. No wonder the critics were putting him alongside Curtis Mayfield, Prince and Stevie Wonder as a true innovator. His 1995 debut set, ‘Brown sugar’ swept all before it and fans eagerly awaited a follow-up set…. sadly they had to wait five long years for ‘Voodoo’ which didn’t quite match the pyrotechnics that ‘Brown Sugar’ initiated.

Japanese collectors were a little luckier. In 1996 the Japanese market was treated to a 6 track D’Angelo EP… ‘Live At The Jazz Cafe, London’. The songs on the set were recorded during the man’s show at London’s Camden Town venue in September 1995 and now the whole show is being made available worldwide. ‘Live At The Jazz Cafe, London; The Complete Show’ will be released on Virgin/Ume on March 25th and it features D’Angelo’s full set that night just as it was performed – including his covers of Mandrill’s ‘Fencewalk’, The Ohio Players’ ‘Sweet Sticky Thing’ and Al Green’s ‘I’m Glad You’re Mine’. Backing vocalists include Angie Stone (then billed as Angie B) and the release features updated artwork, an essay by Alan Leeds and a 1995 D’Angelo interview.