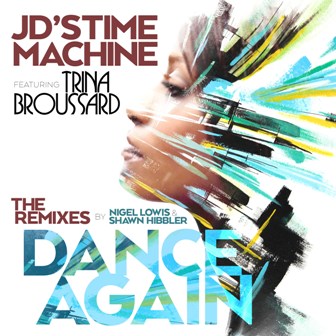 JD’s TIME MACHINE is a vehicle for soul multi tasker, JAMES DAY allowing him to work with all sorts of collaborators – none maybe more revered by soul collectors than TRINA BROUSSARD. Ms B boasts an enviable track record –  work with people like Aretha Franklin, Babyface, Toni Braxton and, of course, her own solo work – including her legendary Motown album.

Tina brings just the right amount of soul shades to the Time Machine’s newie… ‘Dance Again’, which, despite its title isn’t a banging out on the floor groove. .. at least in the “smooth urban jazz” mix. The tempo is cranked up for the Nigel Lowis edit but it never becomes frantic. Both have the flavour of a Toni Braxton oldie about them – hardly surprising given Tina’s track record. Out June 1st.