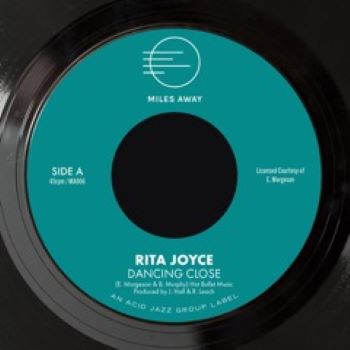 ACID JAZZ RECORDS have just launched a new imprint … MILES AWAY RECORDS and they hit the ground running with the release of a real rarity from Detroit in 1979.

Back in the 70s two Detroit musos Jimmy Hall and Ralph Leach founded an independent record label – Ren Cen Records (named for the famous Renaissance Centre skyscraper area in Detroit). The label lasted almost ten years and released just nine singles. Most of their  artists were drawn from the Detroit area. One such artist was young RITA JOYCE who cut just one single for Ren Cen – ‘Dancing Close’/ ‘Back Home Again’ before sinking into obscurity despite both sides having considerable appeal. The former – gentle and sweet with a vulnerable vocal; the latter – a crisp dancer with a catchy chorus.

As is the way, the soul double AA sided single is now considered a collectors’ item in both the soul and hip-hop communities (various sale sites have it valued between £50 – £200) and so to meet demand Acid Jazz have decided to issue it as the very first release on Miles Away. It will be available from February 19th on 7” vinyl and digitally.