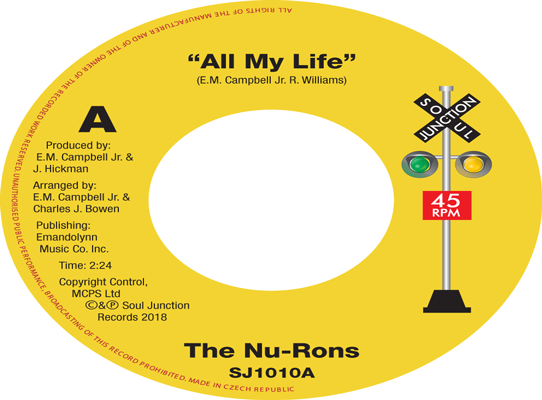 The Nu Rons hailed from Salem, New Jersey and consisted of two sets of brothers Daryl and Raymond Gibson and Otho and Charles Bateman. With Rudolph Gibson they started out as the Gospel 5; then they embraced the devil’s music with so much live energy that they were dubbed the Neurons – which they shortened to The Nu-Rons. As their work load increased Rudolph jumped ship leaving the quartet to be mentored by music hustler Manny Campbell. Campbell then  took the boys into Sigma Studios to work with Thom Bell on two tracks – ‘All Of My Life’ and ‘I’m A Loner’. The songs were eventually released as single on the Nu-Ron label in 1970 but sadly the disc meant little outside the Philly area.

You can probably guess what happened next – right!!! the songs became popular on the Northern soul scene with the quirky, harmonic ‘All My Life’ becoming a big, big tune.

So to oblige collectors, Soul Junction are making ‘All My life’ available 7″ vinyl and sweet and lovely it is too! For the B side, the label has chosen a later, tougher, rougher cut…. ‘Disco Hustle’ This one is credited to The Nu-Rons and Co and it’s been in demand in its own right.

We’re told the Nu-Rons are still active… wonder if they feature these songs in their shows?