CURE FOR YOUR PAIN…. 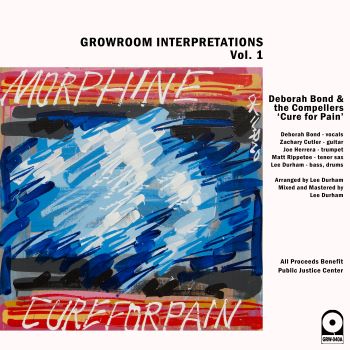 The alternative rock band MORPHINE wouldn’t normally trouble us here @ SJF. Nor would their “classic” 1993 LP ‘Cure For Pain’. However, it seems that US  drummer Lee Durhan has a particular passion for the album and via his Growroom label he’s working to create a song-for-song cover version of it. The release date for the LP is September and we’re told that the new versions will be by “a handful of DC’s most prestigious acts, luminaries from the Growroom Galaxy, and one of NYC’s most eccentric bandleaders.”. More importantly 100% of the profits from this album will be donated to the US Public Justice Centre which stands up for the rights of underserved communities through legal advocacy.

In the meantime, the album title track is set for release this Friday June 9th. And here’s the thing, it features neo-soulstress DEBORAH BOND who fronts the band, the Compellers. Deborah of course wowed right across the soul spectrum with her last album, ‘compass1’.

On ‘Cure For Pain’ she and her team switch the original rock sound towards  a more soulful ballad vibe  and there’s more than a hint of Curtis Mayfield about the affair. Hardly surprising, since featured guitarist Zach Butler was the MD for the Impressions on their last tours while ‘Cure For Pain’ horn players Joe Herrera and Matt Rippetoe were also members of the Impressions’ band.

Deborah Bond & the Compellers – Cure for Pain out July 9 via : Growroom Productions