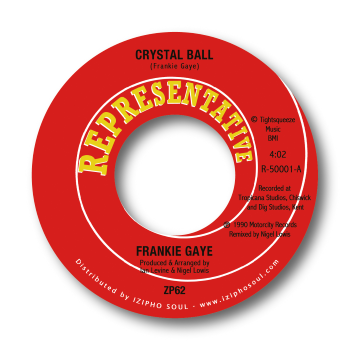 Hot on the heels of the IZIPHO/STREETWALK release of a new Nigel Lowis mix of G C Cameron’s Motor City song, ‘Straight in the Eye’ (an original 1991 Ian Levine production), the Izipho  team have resurrected more  Motor City/Ian Levine gems.

This time their soulful spotlight falls on FRANKIE GAYE, who sadly died in 2001. This  new 7” single offers two tracks that MPG’s brother cut in 1990. They are a delightful ‘Crystal Ball’ and ‘What Goes Around’. The former was penned by Frankie and has a similar atmospheric, harmonic vibe to ‘What’s Going On’. Master mixer, Lowis retains all the charm in his re-work and Frankie’s vocal floats over the lyric in much the same manner as older brother Marvin perfected.

‘What Goes Around’ is a more up-tempo item but no less charming. It’s simplicity is part of its attraction which kind of harks back to the golden age of Motown. The mix on this one was crafted by the late Clive Scott.

As with the Cameron disc, a donation from sales of the record will be made to a local charity-  PSDS who provide support for children with down syndrome and their families.