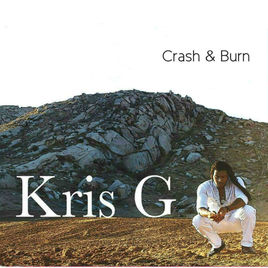 KRIS G (or Kristopher Dwayne Gilder, to give him the full works) is a new California soul man who, like many before, begun singing in the church. As a secular soulster, he’s worked with people like Stevie Wonder, Howard Hewett, Brandy and Jon B and been a member of harmony groups As Yet and Energy.

Right now, though, young Kris is striking out on his own with a solo album, ‘Crash And Burn’. The album’s been produced by the wonderfully named Dr Spank and the main songwriter is Richard Pope who’s long been a part of the Chi-Lites team.

Sadly there aren’t too many songs here that are up to the Chi-Lites standard; the title cut is particularly predictable. That said Kris has a powerful and soulful voice –heard to best effect on the LP’s best cut – the old school soul ballad ‘Bedroom Door’. You can guess from the title what it’s all about and if these lush lurve songs are your thing, a diligent web search will bring you to this one!