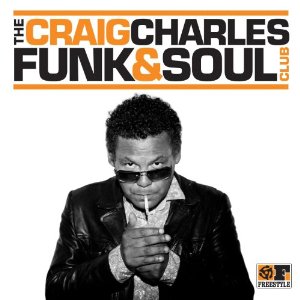 Though to most people CRAIG CHARLES is best known as an actor (‘Red Dwarf’, ‘Coronation St’ etc), he enjoys parallel careers as a poet, stand-up comedian and, of course, radio presenter and club DJ. Born and raised in Liverpool, his father, who came over from Guyana, imbued him with a love of all things soulful and funky. CRAIG says that he was close to being christened OTIS and that one of his earliest memories is of his mum and dad bopping round the kitchen to RAY CHARLES’ ‘I Got A Woman’.

Fast forward to 2001 and the setting up of BBC Radio 6 Music and the appointment of CRAIG CHARLES to present the new station’s soul and funk show. Originally seen as niche programme, the show is the station’s longest running – and has the biggest audience share too. The show’s success soon saw CRAIG on the road, playing out at club nights and festivals everywhere.

Now Freestyle Records have asked the nation’s fave cab driver to compile and curate a soul and funk album to reflect the music he plays on radio and at his gigs. The result is the imaginatively titled ‘The Craig Charles Funk & Soul Club’. The set boast 19 tracks drawn from the indie soul and funk scene and is an eclectic mix of the old and new. Amongst the contemporary tunes there’s THE BAMBOOS’ rambling roller ‘Amen Brother’, the brassy funk of ‘Bump’ from THE HAGGIS HORNS and SMOOVE & TURRELL’S clever ‘Hard Work’ – (very) loosely based around the JOHN HANDY classic. For the oldies there’s stuff like THE INCREDIBLE BONGO BAND’S reading of THE STONES’ ‘Satisfaction’ and the AL WILSON perennial, ‘The Snake’ and for real variety try the infectious reggae romps that are THE STIFF NAKED FOOLS’ ‘Rocket Man’ or PRINCE FATTY’S ‘Insane In The Membrane’ .