CRAIG KEEPS IT FUNKY … AND SOULFUL 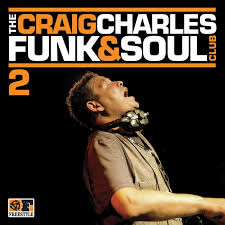 CRAIG CHARLES – the nation’s fave cabbie – has carved out for himself a great little niche in the world of soul n’funk. The Corrie/Red Dwarf actor (who also enjoys a career as a poet and stand up) hosts a hugely successful BBC Radio 6 soul show on which he champions less mainstream black music… esoteric funk, indie soul and all sorts of world flavours. It’s no gimmick… Craig loves the music he espouses. Born and raised in Liverpool, his Guyanan father imbued him with a love of black music (indeed Crag will tell you he was almost christened Otis!) and mum and dad were forever bopping round the Dansette to Ray Charles, Sam Cooke, the Impressions and many more. For the past few years Craig has taken his music passion on the road and played gigs all over the place – mostly to packed, enthusiastic houses revelling in the wide-ranging sounds our man purveys.

Catch up with those sounds on a brand new Freestyle compilation… THE CRAIG CHARLES FUNK & SOUL CLUB 2. The foot-tapping 18 tracker is, as you can see, a follow up to last year’s successful volume 1 and like that album it contains a cross section of sounds typical of Craig’s radio and club outings. Highlights abound… but we’re liking Aldo Vanucci’s tight ‘You’re All Show’. The cut features Aussie soulstress Kylie Auldist who’s in fine form – a spit for classic Aretha! Of note too are the funky ‘Run Around’ from Mop Mop (Fred Wesley’s on the cut); Hot 8 Brass Band’s quirky take on ‘Ghost Town’; Jessica Lauren and Jocelyn Brown’s energized ‘Happiness Train’; and a fab ‘High Heels’ from the Hidden Jazz Quartet. Redolent of the music of Spanish Harem it comes on like a Latinised ‘My Girl Sloopy’ and features great vocal from Omar. Omar, by the way, is on the set in his own right too – with a great remix of his classic ‘There’s Nothing Like This’.

Craig Charles Funk & Soul Show is out now on Freestyle Records and it would make a great stocking filler for any soul or funk fan feeling a little jaded with the predictable.