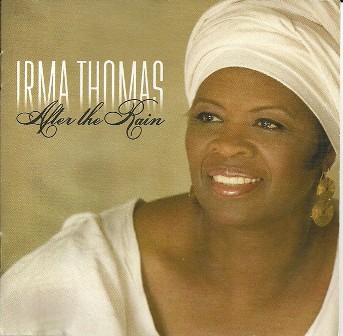 Booker was one of blues music’s more flamboyant and wildest performers. Dr John described him as “the best black, gay, one-eyed junkie piano genius New Orleans has ever produced.” Others called him “the Black Liberace”! He died in 1983 and only ever released three studio albums. The last one, 1983’s ‘Classified’ wins a Craft vinyl LP reissue as befits a label that is pledged to secure the heritage of landmark recordings.

In a storied career, New Orleans soul queen Irma Thomas’ landmark album is generally considered to be ‘After the Rain’. The 2006 set was recorded at the rural Dockside Studio in Maurice Louisiana only months after Hurricane Katrina. A majority of the songs were chosen prior to the hurricane, but the album’s themes offer a message of hope amidst pain and confusion. The album earned Thomas her first GRAMMY® for Best Contemporary Blues Album. Amongst the highlights are covers of Nina Simone’s ‘I Wish I Knew How It Feels To Be Free’, the Drifters’ ‘I Count The Tears’ and Stevie Wonder’s ‘’Shelter In The Rain’.

Both vinyl albums will be available from July 31st.