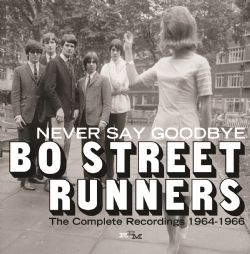 Lots of soul collectors make a point of collecting 60s UK cover versions of their favourite soul songs. Indeed many of those collectors got themselves into soul via those beat combo cover versions in the first place! If you’re in that category, you’ll be delighted to know that the Cherry Red label group has just issued a couple of splendid albums on two UK groups who (at least in their early stages) flourished by covering classic soul and blues numbers.

First up there’s a 17 track album on London band, THE BO STREET RUNNERS. Called ‘Never Say Goodbye’ and released on RPM it includes all the group’s recordings between 1964 and 1966. The quintet began life in West London as the Roadrunners (in homage to the Bo Diddley song) but confusion with similarly-named outfits led to a name change and ‘Bo Street Runners’ kept the Diddley link!

Winning a TV talent show (on the famous ‘Ready Steady Go’, no less) led to a recording contract and the material they cut reflected their love of blues, R&B and embryonic soul and it’s all catalogued here. Included are the Runners’ versions of stuff like Willie Dixon’s ‘Love To You’ and Jimmy Reed’s ‘Shame, Shame, Shame’ and a self-penned ‘Can’t Stop Talkin’ About My Baby’ which is now hugely collectable because of its remarkable 60s Chicago soul feel. The Bo Street Runners never made the big time, but one member – a certain Mick Fleetwood – did go onto enjoy a modicum of success with a rather famous band!

Maybe more significant for the collectors is a fab box set on the MOODY BLUES. Released on the Cherry Red imprint Esoteric, the set contain two CDs that offer everything the Birmingham combo recorded before 1966. OK, most people associate the Moody Blues with overblown pomp rock but when they were formed from an amalgam of Brummie beat groups they plied the then obligatory blues and soul covers…. their name is a clue, I suppose!

Like the Bo Street Runners (and all other 60s groups, including the Beatles) the Moodies’ early recordings reflected their live shows and in this collection – ‘The Magnificent Moodies’ – you can enjoy their take on things like James Brown’s ‘I’ll Go Crazy’, The Drifters’ I Don’t Want To Go On Without You’, Arthur Alexander’s ‘You Better Move On’ and Rufus Thomas’ ‘Jump Back’. Naturally you also get their cover of Bessie Banks’ ‘Go Now’ which went all the way to number 1 in 1965 and remains a classic of the beat era.

In Denny Laine the Moody Blues possessed a charismatic (and soul loving) front man and when he left, the band were rudderless for a while. Then with new members on board they changed direction to become kings of the bombast… but in those early times they did craft some remarkable UK soul and blues.