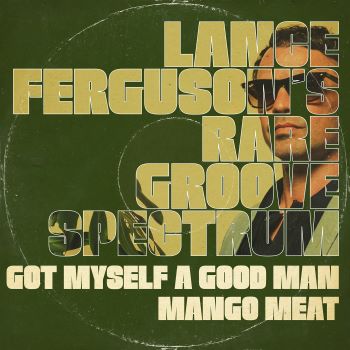 It was back in February that Aussie soul all-rounder LANCE FERGUSON hit us with a second volume of his ‘Rare Groove Spectrum’ – a series that sees Mr. F imaginatively cook up covers of ultra-rare and/or classic soul, jazz and funk tunes.

A month or so down the line and our man is back with a 7” single with the same mission statement i.e. to offer new twists on classic soul and funk. This new release pairs ‘Got Myself A Good Man’ with ‘Mango Meat’ . Soul anoraks should  recognize those titles straight away. ‘Good Man’ was originally recorded by Gladys Knight and the Pips on their 1969 ‘Nitty Gritty’ album. A few years later Pucho and his Latin Soul Brothers covered the Norman Whitfield/Barret Strong tune and it’s the Pucho version that Lance uses as the template for his re-reading – so, yes, covering the covers, if you like! His version features a wicked drum track, crazy flute, funky guitars and big brass… a good ‘un!

‘Mango Meat’ was originally  recorded by Mandrill and Ferguson gives it a punchy Latin funk makeover. There’s salsa-inflected horns, insistent guitar riffs and more crazy flute courtesy of Remco Keijer. Like ‘Got Myself A Good Man it’s full on – a foot tapper, a head nodder, proper funky – the lot! The disc is out now via Freestyle Records and we don’t know if it’s a free standing project or whether the two cuts are outtakes from the album or indeed tasters for a Volume 3 (which the art work, above, would suggest)!