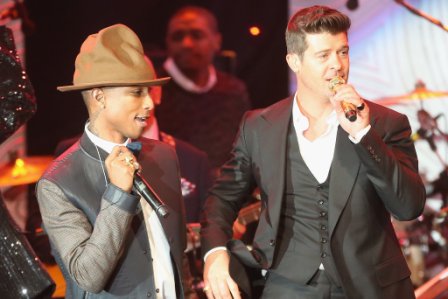 The jury found that Williams and Thicke copied Gaye’s 1977 hit ‘Got To Give It Up’ in a lawsuit filed by Gaye’s children. Amongst them, and in court to hear the verdict, was Nona Gaye who wept and said, “Right now, I feel free. Free from … Pharrell Williams and Robin Thicke’s chains and what they tried to keep on us and the lies that were told.” For their part Williams and Thicke’s attorneys said that the decision in favour of Gaye’s heirs could have a chilling effect on musicians who try to emulate an era or another artist’s sound.

Robin Thicke had stated that he didn’t write ‘Blurred Lines’; rather Pharrell Williams crafted it in about an hour in mid-2012. Williams told the court that, of course, “Gaye’s music was part of the soundtrack of my youth“. But he denied using any of it to create ‘Blurred Lines’.

Gaye’s children also believe that Pharrell’s mega-hit, ‘Happy’ bears a real resemblance to their father’s ‘Ain’t That Peculiar’ while US news sites report that Charlie Wilson, co-founder of the Gap Band, is listening long and hard to Mark Ronson’s ‘Uptown Funk’ which he says is very similar to his ‘Oops Upside Your Head’, though others are saying the Ronson tune is based on The Time’s ‘Jungle Love’. Looks like this one will run and run and we all know who the ultimate winners will be…. yep, those lawyers

For the record, Gaye died in April 1984, of course, leaving his children the copyrights to his music.