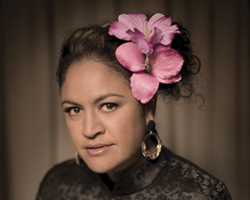 Australia’s other KYLIE – the wonderful KYLIE AULDIST – is set to release her third album in mid October. The fab (we’ve had a sneak preview) ten tracker is heralded with the release of a double A side digital single – ‘Counting On You’/’Changes’.

‘Counting On You’ is breezy dancer and though ‘Changes’ is aimed at the dance floor too, it’s a decidedly heavier proposition with hints of that glorious CHIC sound about it. Produced by LANCE FERGUSON of the BAMBOOS it boasts a clever and catchy chorus that’s accentuated in the LANU remix that accompanies the single. On that one the beats are heavier too and, clocking in at over six minutes, it’s a gift for discerning DJs. The single will available from 17th September with the album – titled ‘Still Life’ on the racks from 15th October and without giving away too much I can tell you that proper soul fans will love the LP’s title cut.