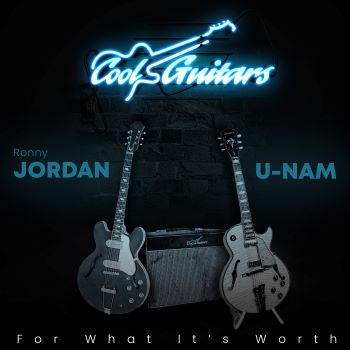 Back in 2016 jazz guitarist U-NAM and Vernon Clarke (CEO of the Cool Guitars accessory company) put together a collaborative guitar album, called, obviously, ‘Cool Guitars’. The 7-tracker featured U-Nam in guitar duets with people like Mark Bowers, Nick Morrison and Ronny Jordan (who, of course, sadly died in 2014).

U-Nam always knew there had to be a second album and right now that’s what he’s putting together and to whet appetites he’s just released the very first track from it – a properly funky and fierce version of Buffalo Springfield’s ‘For What It’s Worth’. On it he trades guitars licks with the aforementioned Ronny Jordan. The track, it seems, was one of many that Jordan was working on just prior to his too-early passing. U-Nam sees the now finished track as the ultimate homage to a dear friend. Featuring input from people like Alex Al (Michael Jackson, Brian Culbertson, Dave Koz, Stevie Wonder) on bass and Bill Steinway (The Crusaders, Larry Carlton) on both Fender Rhodes and Hammond B3, U-Nam’s sure (and we agree!)  that Ronny would be mightily pleased with the end result.

‘For What It’s Worth’ is out now and a ‘Cool Guitars volume 2’ will be out later in the year!