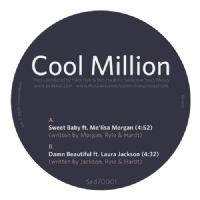 By general acclaim COOL MILLION’S ‘Going Out Tonight’ long player is one of the best modern soul sets of recent years. Well, the COOL MILLION boys – ROB HARDT and FRANK RYLE – are back in the studio busily working on their next album which as yet remains untitled but they hope to have it in the shops by February 2010. To whet soul appetites, the duo have released the record’s first single – ‘Sweet Baby’ – a delicious, bass-heavy slab of danceable modern soul with a strong retro undertow. To nail the track, COOL MILLION persuaded 80s soul siren MELI’SA MORGAN into the studio to take lead vocal and, listening, it’s like time’s stood still as ‘Sweet Baby’ looks set to rival the lady’s best. The song is now available as a download from all the usual internet platforms but for those who still like the feel of vinyl you can pick up a 7″ from Crazy Beat, Fat City and Soul Brother… the label’s Sed Soul, by the way.