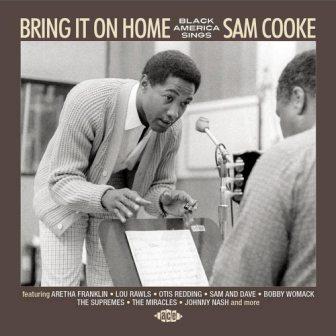 The great SAM COOKE was one of soul’s founding fathers. His gospel-reared voice was the voice of early soul, laying down a template for others to follow, and many of those “followers” were quick to cover Sam’s own songs. Remember, Sam wasn’t just the consummate soul singer, he was also a prolific song writer and Ace Records have pulled together 24 covers of some of his very best creations.

Interestingly many of the selections here come from artists with close Cooke connections – people like Johnnie Taylor (‘Rome Wasn’t Built In A Day’), Bobby Womack (‘I’m Gonna Forget About You’) and Lou Rawls (‘Win Your Love’).

The set also features lots of big, big names- including the King and Queen of Soul (enjoy Otis’ version of ‘Shake’ and Aretha’s treatment of ‘Good Times’). There’s a couple of Motown items (from the Supremes and the Miracles) and one of the very best Cooke covers ever – Sam and Dave’s ‘Soothe Me’.

Sam’s most important song ‘A Change Is Gonna Come’ is naturally included and the compilers have gone for an unusual and little known version – from Brenton Wood while the album kicks off with the ‘Having A Party Medley’ from the Ovations whose lead singer – the remarkable Louis Williams – sometimes sounded more like Sam Cooke than Sam himself.

BRING IT ON HOME – BACK AMERICA SINGS SAM COOKE is out now on Ace Records.