COME AND GET IT 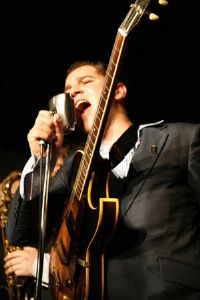 One of last year’s best old school “real” soul albums was ‘Roll With You’ from ELI ‘PAPERBOY’ REED’… well the good news is that the boy’s back with a brand new album – ‘Come And Get It’- to be released on May 10th. The album’s title track will be issued as a single the same day and pre-release leaks indicate a tune bursting with 60’s soul sensitivities. REED – who hails from Boston – earned his nickname by wearing his granddad’s newsboy’s hat whilst gigging in and around the Mississippi Delta. It wasn’t just that nickname that stuck, but a love of real, passionate southern soul – his first two albums are testament to that. ‘Come And Get It’ will be REED’S first work with a major label (Capitol in the States, Parlophone in the UK). Watch out for a full review on http://www.soulandjazzandfunk.com very soon

Tags: COME AND GET IT