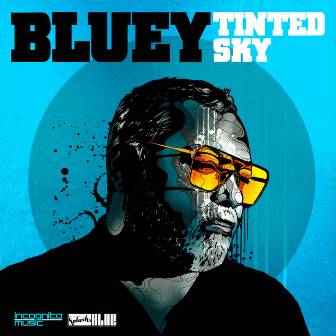 You shouldn’t need us to tell you that BLUEY (Jean-Paul Maunick) is a very, very busy man. He’s the brains behind Incognito and a top, top in-demand producer, mixer and session player/collaborator. Amongst those he’s worked with are (wait for it!) George Benson, Mario Biondi, Phillip Bailey, Maxi Priest, Maysa, Terry Callier, Stevie Wonder, Al Jarreau, Paul Weller, Anastasia, Lulu, George Duke, Carleen Anderson, Omar, Leon Ware, Al McKay, Hamish Stuart and Chaka Khan. Right now he’s working with Citrus Sun and has just collaborated with Chris “Big Dog” Davis on his just released album. No wonder he finds it hard to work on his own projects. In fact it took Bluey something like 30 years to release a solo set – the magnificent ‘Leap Of Faith’ then came the equally intriguing ‘Life Between The Notes’ and now some five years later he’s set to treat us to a new solo set, the 11 tracker that is ‘Tinted Sky’.

Bluey says:  “Writing this album against the backdrop of the Global Pandemic which we all face, I find myself thinking about coping mechanisms-of which we all draw upon and hold on to. For me its music. Throughout my life, I have turned to music for comfort, to remember, for inspiration and to celebrate. It is the constant that has been there from my first memory on planet earth and will probably be my last” and as a coping mechanism, ‘Tinted Sky fits the bill admirably. It’s full if pleasing, optimistic, lose-yourself-in-the-music tunes… none better than the album opener, ‘You Are The One’. This is a proper, windows down (or top off if you have a posh car), cruising tune… a classic summer vibe , if you would. One of its attractions are the sweet, wrap around harmonies and those lush harmonics are one of this album’s signature sounds. Hear more of them on ‘Don’t Ask Me Why’ and other cuts – in places those voices in harmony could be the Beach Boys, elsewhere the harmonics are more EWF… but they are lovely.

‘Tinted Sky’ also offers degrees of complexity… Bluey, you’ll know, isn’t one to shy away from issues. ‘Unaware’ is a dark tale of despair (the result of gangs/guns/drugs) while the closing ‘Floating World’ deals with ecological/survival issues. The most complex musical offering is the mood-shifting ‘Make It Last Forever’ while the LP’s title track offers more food for thought.