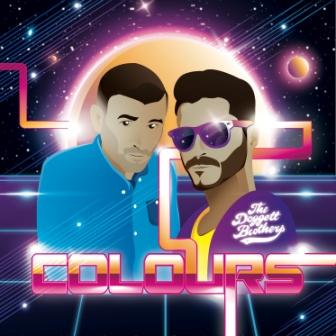 We first came across Great Yarmouth’s DOGGETT BROTHERS back in 2010 when a tune of theirs surfaced on one of those wonderful ‘Soul Unsigned’ albums. Since then, the boys – Greg and Carl – won more soul friends with their ‘Daylight’ album which garnered Jazz FM’s “album of the week” accolade no less!

Now the team are putting finishing touches to their latest long player – ‘Colours’ – set for a May 20th launch. The Doggetts are essentially producers and musicians and helping them deliver the 11 tracks of ‘Colours’ they’ve drafted in some mighty fine vocal talent… most notably dear old Kenny Thomas! Our Ken takes lead on a lazy, soul meander called ‘You Make Me Feel’ which aptly illustrates what seems to be the Doggetts’ musical philosophy…. less can actually be more!

Amongst the other vocalists are Laura Jackson who’s out front on the lovely, retro ‘Lover’ (shades of ‘Never Give Up On A Good Thing’) and Stacey Stuart who takes lead on ‘Fill My Cup’ and ‘You And I’. The album’s lead single though features the voice of Arnob Basit. His tune’s an edgy ‘Outta Control’ – a proper old school flavour with a light, almost jazzy vocal.

Bros Doggetts say;”We wanted to create an album that displayed our infatuation and love of soul, with real, song writing, and beautiful performances.” The leaked tracks indicate that they’ve succeeded.

We’ll bring you a full review just as soon as we have the whole album!