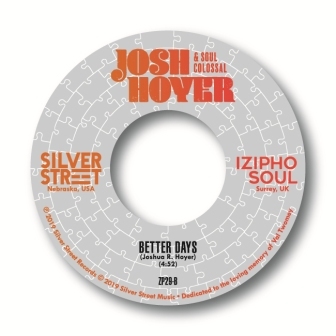 SOUL COLOSSAL is a five piece band from Lincoln, Nebraska. They are Benjamin Kushner (guitar), Blake DeForest (trumpet), Mike Keeling (bass), Larell Ware (drums) and big voiced vocalist JOSH HOYER . The players came together via their mutual love for classic soul and funk – specifically the sounds of Stax, Motown, Muscle Shoals, New Orleans and Philadelphia. Their uncompromising commitment to that formula has provided the band with plenty of work and their 2018 LP ‘Do It Now’ was championed by soul connoisseurs everywhere.

Interestingly one of the band’s earlier singles is winning plenty of attention and air play right now . It’s ‘Parts Of A Man’ from 2016 and it’s a classic slab of melodic, deep soul. Demand is such that UK label Izipho Records in collaboration with Silver Street Records is set to issue it on 7″ vinyl. The good news is that the putative B side is just as good (I’d say better!). It’s a top track from the group’s aforementioned LP. The song is the gorgeous mid-tempo outing ‘Better Days’… a positive summation of all that is good about great modern soul. It comes compete with some fab trumpet work from Blake DeForest. Last year we said: “This mid-tempo groove is drenched in the most remarkable horn arrangement and soloing this side of the last Tower Of Power album.” Hearing it again only confirms that. The cherry on the cake for the two sides is the mighty powerful, “colossal” voice of Josh Hoyer.