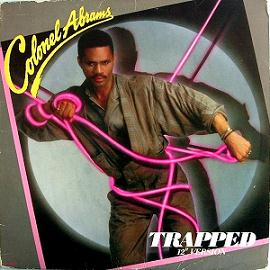 Soul singer/songwriter COLONEL ABRAMS died on Friday 25th November. He was aged 67 and the circumstances surrounding his death are particularly sad. A major hit-maker in the 80s, news reports suggest that in recent years he was homeless relying on handouts and charity crowdfunding. That situation exacerbated his diabetes which seems to be the cause of his death.

Born in Detroit in 1949, Donald “Colonel” Abrams was raised in New York where he mastered the guitar and piano at a young age. In the early 70s he was part of the group Heavy Impact before joining 94 East, a group that numbered Prince amongst its members.

In 1984 his tune ‘Music Is The Answer’ brought him his first taste of solo success. That was quickly followed by ‘Leave the Message Behind the Door’ (actually the B-side of ‘Music Is The Answer’), ‘Over And Over’, ‘I’m Not Gonna Let You’ and ‘Trapped’ which became his biggest hit.

He continued to record and performs throughout the 90s, sometimes fronting house tracks and as late as 2007 he released the single ‘Just When You Thought’.

His friend Tony Tune Herbert posted the following message to Facebook: “Just got word that Colonel Abrams has [passed] away on Thanksgiving, one year to the date that I along with Don Welch, Barbara Tucker, Derek Jenkins, Ralph McDaniels, Marshall Jefferson, Larkie Rucker and a host of his biggest fans fought to get him to let us help him….Now he is at peace and our condolences go out to his family, and fans worldwide, he is no longer suffering or Trapped!!!”