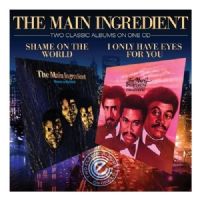 Expansion Records are set to release a remarkable twofer album on the MAIN INGREDIENT. The 18 tracker pairs the harmony group’s 1975 LP ‘Shame On The World’ with 1981’s ‘I Only Have Eyes For You’. Neither has appeared on CD before and there’s the added bonus of the group’s previously unreleased version of the BEN E KING song ‘Spoiled’. That one was written by J. R. BAILEY as were a couple of other featured songs including ‘Let Me Prove My Love To You’, which, of course, was successfully sampled by ALICIA KEYS on ‘You Don’t Know My Name’. With other songs coming from the pens of LUTHER VANDROSS, LAMONT DOZIER and BARRY MANN, the set is unmissable for collectors of group soul.