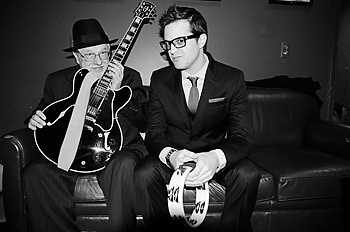 “Legendary” is an adjective used with far too much impunity in the music biz… however no one would ever doubt the right of Detroit guitar man DENNIS COFFEY to have the adjective tagged to his name. COFFEY, of course, was an integral member of MOTOWN’S FUNK BROTHERS and he played on countless hits. Notably, his distinctive wah-wah guitar sound came to dominate many of the TEMPTATIONS’ hits in their so-called “physco-soul” period. Beyond that, it’s DENNIS’ guitar on FREDA PAYNE’S ‘Band Of Gold’ while the anoraks will gladly list hundreds of pop hits on which he played.

COFFEY has enjoyed a sporadic solo career too; his ‘Scorpio’ becoming a staple of the break beat brigade. April 25th sees him release a brand new solo album. Simply titled ‘DENNIS COFFEY’, the 11 tracker features a mix of new tunes and old songs on which he originally featured. To add relish to those “oldies”, the guitar man has hand-picked some up and coming artists to handle the vocals. So – amongst others – FANNY FRANKLIN (of funk combo, ORGONE) takes on WILSON PICKETT’S ‘Don’t Knock My Love’ and PAOLO NUTINI contributes on RODRIGUEZ’ ‘Only Good For Conversation’. One of the highlights is MAYER HAWTHORNE (pictured with DENNIS) guesting on THE PARLIAMENTS’ ‘All Your Goodies Are Gone’.

‘DENNIS COFFEY’ by DENNIS COFFEY IS RELEASED ON STRUT RECORDS ON APRIL 25TH. FIND OUT MORE AND ENJOY A PREVIEW BY GOING TO….