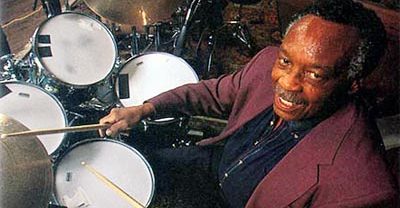 Famed funk drummer, CLYDE STUBBLEFIELD died yesterday, Saturday 18th February. He was aged 73 and his wife, Jody Hannon, posted that Clyde had died of kidney failure at a Madison, Wisconsin, hospital. He had been suffering from kidney disease for 10 years, and had been hospitalised for a few days, she added.

Stubblefield was born in Chattanooga, Tennessee in 1943. We’re told that he aspired to be a drummer after seeing a drum band in a local parade after which he pursued his vocation with a passion. In the early 1960s he worked with guitarist Eddie Kirkland and toured with Otis Redding, and then, most famously, joined the James Brown band in 1965.

Clyde played on all the classic James Brown records through the late 60s/early 70s… notably ‘Cold Sweat’, ‘Say It Loud I’m Black And I’m Proud’, ‘I’ve Got The Feelin”, and ‘Sex Machine’. However he’ll be forever remembered for his brief solo on Brown’s 1970 single, ‘Funky Drummer’. It’s been said that the break has been sampled over 1,000 times. You can hear it on thing s like Public Enemy’s ‘Fight The Power’, Dr. Dre’s ‘Let Me Ride’, LL Cool J’s ‘Mama Said Knock You Out’ and Run-D.M.C.’s ‘Run’s House’. Even George Michael sampled it (‘Freedom ’90’) and more recently Ed Sheeran used it on ‘Shirtsleeves’.

After working with Brown, Stubblefield went on to work with artists like Marva Whitney, Ben Sidran, Pee Wee Ellis, Bobby Byrd, Phil Upchurch and Public Enemy. He also worked regularly with local musicians in his adopted home town of Madison. The drummer also guested with the The J.B.’s and together they released the album ‘Bring the Funk On Down’ in 1999. Two years earlier he’d released a solo set, ‘The Revenge Of The Funky Drummer’ and in 2002 he released a 26 track break-beat album titled ‘The Original Funky Drummer Breakbeat Album’. Stubblefield’s third solo album ‘The Original’ was released in 2003.

Jody Hannon said that her husband saw “very little” in royalties and never expected them.

But Stubblefield was held in high esteem by his fellow musicians. It’s reported that in 2000 when Prince learned Stubblefield was deep in debt from medical bills after treatment for bladder cancer; he personally paid $90,000 to cover the bills.