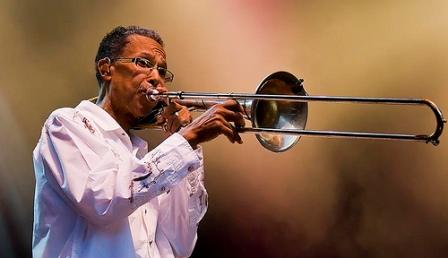 Trombonist CLIFFORD ADAMS died on Monday 12th January at Trenton, New Jersey. He was aged 62. He died after a long struggle with liver cancer.

Adams, best known for his work with Kool and the Gang, was born in Trenton in 1952 and learned the rudiments of the trombone at school under the tutelage of Tommy Gryce. His first pro gig was with Patti Labelle’s road band in 1970; then in 1971 he made his recording debut as sideman on Charles Earland’s ‘Soul Story’ album. More road work followed – notably with the Stylistics, Lou Donaldson and Richard “Groove” Holmes.

In 1977 Clifford joined Kool and the Gang and remained a member of the group till his passing. He played on all the band’s second phase hits … classics like ‘Ladies Night’ and ‘Too Hot’, while in a recent interview he stated that he was particularly proud of his work on ‘Joanna’ and ‘Slam Dunk’.

In his own right Adams played as guest soloist at concerts throughout the States and even taught music classes at prestigious universities like Princeton and Yale and under his own name he released two solo albums – ‘The Master Power’ and ‘I Feel Your Spirit’. Clifford also founded the organisation DRUMM (Developmental Roundtable for the Upward Mobility of Musicians), which was dedicated in bringing music into Trenton schools.

In recent years he suffered from poor health and reports suggest that he had no medical insurance to cover his bills and his family and friends held several fundraisers to try to cover the cost of a liver transplant.

Long-time friend and fellow Kool and the Gang musician Michael Ray said of Clifford Adams: “This was my closest and my oldest friend. If you knew Cliff you knew his infectious smile and his strong spirit. … He was powered by family values and he was one of the baddest trombone players in all the planet.”