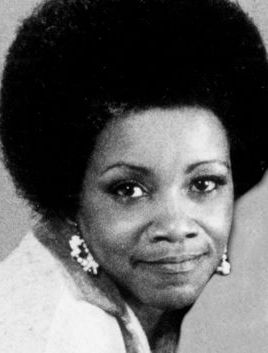 CLEOTHA STAPLES, a founding member of family group, THE STAPLE SINGERS died on Thursday 21st February. She was 78 and had been suffering from Alzheimer’s disease for the last decade.

Born in Drew, Mississippi in 1934, CLEEDI – as she was known to her family – began singing with her father ROEBUCK “POPS” STAPLES and siblings in 1948 and across five decades THE STAPLE SINGERS had a remarkable career, bringing the Gospel message to the masses. The original group consisted of POPS STAPLES, his daughters CLEOTHA and MAVIS and son, PERVIS. The group took their quirky, archaic folk-based gospel music round the store front churches of rural Mississippi before recording with labels like United, Vee Jay and Riverside. Then, with Stax, they enjoyed their biggest hits with songs like ‘Respect Yourself’ and ‘I’ll Take You There’. By this time another sister, YVONNE, had replaced PERVIS and the STAPLES’ signature sound had been modernized and expanded to deal with the secular as well as the spiritual. They also worked with CURTIS MAYFIELD. The group’s ‘Let’s Do It Again (on Curtom) was a no. 1 hit

The STAPLES (in various permutations) worked until 2000, when POPS STAPLES died. Soon afterwards, CLEOTHA was diagnosed with Alzheimers.

MAVIS STAPLES still performs; she paid tribute to CLEOTHA, thus, “A lot of singers would try to sing like her. Her voice would just ring in your ear. It wasn’t harsh or hitting you hard, it was soothing. She gave us that country sound.”

CLEOTHA is survived by her brother PERVIS and sisters MAVIS and YVONNE. Her husband, EDGAR HARRIS, and her sister CYNTHIA predeceased her. She’s pictured second left in our group image.