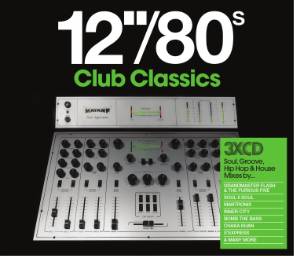 Universal’s occasional, but no less wonderful, series of 80s club classic compilations continues with the imaginatively named ’12″/80s CLUB CLASSICS’… and if you think about it, they don’t need a fancier name, do they?

The 3 CD, 33 track collection is exactly that… a set of bona fide club classics from clubbing’s golden age, presented in full length 12″ formats. The music – over 4 hours worth – spans all kinds of genres – soul, electro-funk, rare groove, hip-hop, techno and house. Amongst the featured cuts are Chaka Khan’s ‘I Feel For You’, Gwen Guthrie’s ‘It Should Have Been You’, The SOS Band’s ‘Just Be Good To Me’, Cameo’s ‘She’s Strange’ and Thelma Houston’s hard to find right now ‘You Used To Hold Me Tight’. Mantronix, Bomb The Bass, Ten City, Marshall Jefferson, Rochelle, Teena Marie, Alexander O’Neal and many more are in the mix too – there in tribute to the magic of venues like The Paradise Garage, the Hacienda, the Africa Centre and Shake N Fingerpop. Nostalgia never sounded so good!

12″/80s CLUB CLASSICS is out now. Go to our reviews section for an in-depth look at the album