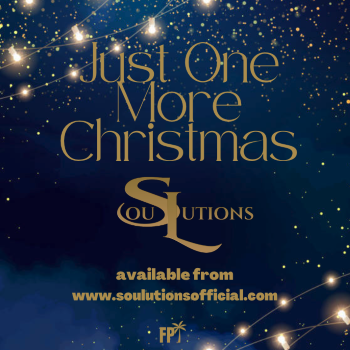 … and still they come! Here’s another selection of new Christmas soul cuts. If you need some fresh sonic baubles to hang on your sonic tree you may want to investigate some or all of these…

Heading this round up is Geordie soul  band SOULUTIONS who offer a sweet and lovely ‘Just One More Christmas’. This is a warm, reassuring tune, free from the usual Christmas music clichés. Louise Mehan is in tremendous form, proving that right now she’s up there with the best Brit soul birds while Steve Lee crafts just the right soundscape. This one’s only available via the band’s web site https://www.soulutionsofficial.co.uk/

LEEE JOHN’S Christmas present  to us is his cover  Donny H’s ‘This Christmas’. He treats it with respect  but adds a few different flourishes and in places you can appreciate his classic falsetto voice. But do we need another version of this song? Maybe Leee needed to use a little more imagination! (see what we did there!!!)

‘Freedom In The Air’ is the Christmas single from sometime Abbey Road engineer, ANDREW WOOD MITCHELL and his AM BAND. This one sounds  like a show tune – hardly surprising, it’s taken from the AM Band’s album ‘ A Global Carol’ – a loose adaptation of Charles Dickens classic ‘A Christmas Carol’. This one is worth supporting if only that it’s a charity release to help for The Redcross Africa Famine Appeal and A Rocha International Rainforest Charity.

Maybe more truly soulful is CANDACE WOODSON’S ‘What Do The Lonely Do At Christmas’. Proper soul buffs will recognize the song. Written by Homer Banks and Carl Hampton, it was originally cut by the Emotions then graced Patti Labelle’s Christmas album. So yes, great pedigree to this song and Candace acquits herself beautifully. You’d expect that given her gospel background!

US songbird CASTELLA (Cathy Rebecca Crowell-Thompson) joins the Christmas rush with ‘And So It’s Christmas’.  Castella, you may know, has a gospel background and it shines through on this percussive, almost Latin vibe. The cut’s putative B side is the lady’s jazzy version of ‘Sleigh Ride’ which she first released last Christmas.

Hilary Mwelwa – HIL ST SOUL, of course, tells us that she want to spend ‘Christmas With You’. This is another proper soul tune free from cliché. It’s just the lyric that deals with the seasonal issues and, we all know that anything branded Hil St Soul is worth investigating!

In case we didn’t know, Detroit soul man AL LINDSEY reminds us that it’s ‘Christmas Time’ . He doesn’t remind us though that he first released this one in 2019. That doesn’t matter, it’s a pleasing item. Al has a wonderful old school soul voice – gritty and world weary – a bit David Ruffin and bit Bobby Womack. Nice tune!

Big voiced New York-based TYGRESSA has selected the oldest Christmas chestnut for her Yule offering, she’s having a go at ‘White Christmas’.  She has a lovely voice and the production strives to be a little different but with something so familiar that’s difficult. It’s out now!

Finally (phew!) another oldie – but from only as far back as 2015! Some may remember that at Christmas 2015 a team of  Brit soul mainstays got together to craft a very special Christmas record to raise funds for the all-important MacMillan Cancer Support charity. They were marshalled by Solar radio DJ Gary Spence, mix master Nigel Lowis  and DSG Records head man, Gary Van den Bussch and thus  the SANTA & THE SWEET RHYTHMS BAND was born and their tune, ‘Christmas Cheer’ raised plenty of funds. Well done to the team. And why not re-promote it? It’s now out again in a new re-mastered version but still sounds as bonkers and the cause is still a good ‘un!