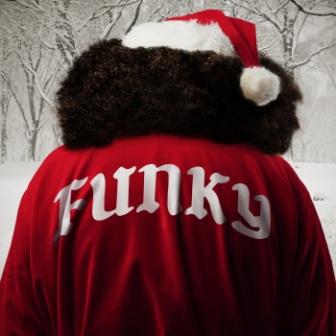 You don’t need us to tell you that Christmas is on its way…. it’s creeping up on us right now. And of course along with Slade on repeat in your favourite shops and said shops groaning with all kinds of Christmas treats and tat, the record companies are lining up plenty of Christmas “goodies”.

Here we present three offerings that might tempt you to get into the Yule mood. First up there’s a ten tracker from ALOE BLACC… ‘Christmas Funk’. In truth it’s not the kind of funk that JB or George C would recognize but the whole thing is a cut above your usual Christmas fare…. actually, ‘Tell Your Mama’ does get a little tough and funky. Most of the tunes are Blacc originals but a cover of Wham’s ‘Last Christmas’ is, shall we say, rather interesting. Equally intriguing is the rap saga of how ‘The Mrs Saved Christmas’.

More traditional, maybe, is ‘A Legendary Christmas’ from, you guessed it… JOHN LEGEND. Every major artist, sometime or other, feels the need to cut a Christmas long player and Mr L clearly feels his time is now. His album is a 14 tracker and has been produced and arranged by Raphael Saadiq. The repertoire is a mix of well known Christmas fare and new tunes like the poignant ‘Waiting For Christmas’. Amongst the familiar songs are versions of Marvin Gaye’s ‘Purple Snowflakes’, Charles Brown’s ‘Please Come Home For Christmas’, Stevie’s ‘What Christmas Means To Me’ (with Stevie on harmonica) and ‘Have Yourself A Merry Little Christmas’ which is a gorgeously lush duet with Esperanza Spalding.

… and speaking of that great song, Canadian singer CHERRILL RAE (whose version of the Temptations’ ‘Since I Lost My Baby’ we recently recommended) has just released a very traditional version of it as her Christmas single. The B side is a straight take on ‘O Holy Night’… both perfect for traditionalists.