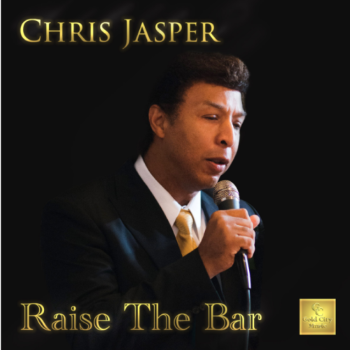 New music from garlanded  soul vet CHRIS  JASPER is always welcome and back in January we were promised a new set when the sometime Isley Brother bandsman released a sweet and lovely single,  ‘I Promise’ –  a contemporary soul groove that bore all the hallmarks of Chris’ previous work. The single was targeted at the Valentines Day market  and on release Chris’ team told us it was from an upcoming long player… ‘Raise The Bar’

Well said album is now with us and ‘I Promise’ still sounds good and it’s one of several romantic cuts on the concise 8 tracker. The other “sweet spots” are ‘Hey Love’ and ‘The Way You Love Me’. Both, like ‘I Promise’,  perfectly suited to Mr J’s velvety tenor with all three songs dedicated to our man’s wife, Margie. And, at last, Mrs Jasper takes to the mic  on the album too. She features on ‘Our Little Boy’ – a song dedicated to the couple’s three sons and she adds bvs to the funky ‘I Love Rhythm And Blues’ and the socially conscious ‘We Are The People’. The album’s title track also delivers a strong social message, proffered over a tough, sparse, crunching track that recalls the best funk moments from old Isley Brothers and Isley-Jasper-Isley LPs.

The gentle, ‘Praising You’ brings a message of a different sort. Chris is a man of faith and this is the album’s moment of spiritual reflection. But whether the song has a religious feel, a socio/political message with a tough funk back beat or a romantic ballad the sound is unmistakenly the sound of Chris Jasper. No one delivers quite like he does… long may it continue!

Chris Jasper’s ‘Raise The Bar’ is out now via Chris’ own Gold City Music label.