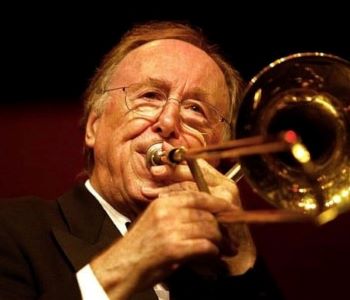 British jazz legend Chris Barber died on Monday 1st March. He was 90 and it was reported that he died peacefully in his sleep. He had been suffering from dementia for the last couple of years.

Born in 1930, Barber was a trombone maestro who, smitten by New Orleans style traditional jazz, started his own band in the 1940s. In 1953 he joined forces with the (then) better known Monty Sunshine and Ken Colyer. The band was originally known as the Ken Colyer Jazz Band but after a year Colyer left and Barber’s name was out front. The band played traditional jazz alongside swing, blues, skiffle and nascent R&B. Barber was also instrumental in inviting US blues men to the UK to play with his band. At times, the Barber band featured Alexis Korner and Lonnie Donnegan – both of whom were to have a huge impact on the British beat and blues boom. Korner, it’s well known, was a major player in the early years of the Rolling Stones while the Beatles always acknowledged the importance of Lonnie Donnegan in their evolution.  Indeed, keen to pay his respects to Barber, Paul McCartney wrote the tune ‘Catswalk’ for the Barber band. Barber’s best-known recording however was his treatment of Sidney Bechet’s ‘Petite Fleur’ which was a no. 3 hit in 1956.

Chris Barber enjoyed a lengthy career and was awarded an OBE for his services to music in 1991. He only announced his retirement in 2019 after performing for 70 years.