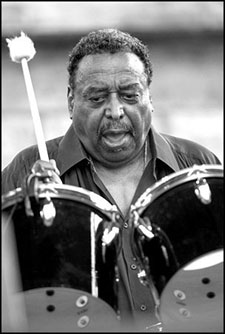 Jazz drummer and bandleader Chico Hamilton, who played with the likes of Lionel Hampton, Lena Horne and Duke Ellington before leading his own bands, died on Nov. 25 in New York. He was 92. The News Agencies that reported his death did not explain a specific cause though it was known that Hamilton had suffered with emphysema late in life.

Born in Los Angeles, Hamilton enjoyed a long and varied career. A high school class mate of Charles Mingus, he’d already notched sessions with a number of jazz greats – including Lionel Hampton, Count Basie and Lester Young – by the time he reached his mid-20s going on to play with many more jazz icons.

In the mid fifties he formed his own band – the Chico Hamilton Quintet and in the 60s he moved to New York City branching out into composing for films and TV. He recorded and toured constantly and released his last album, ‘Revelation’ in 2011.

For Soul music followers, Hamilton is probably best remembered for his 1980 album ‘Nomad’, which featured the tracks ‘Mysterious Maiden’ and ‘Strut’.

Hamilton was also a committed music educator and for some years taught at York’s New School for Jazz and Contemporary Music, and he was named an NEA Jazz Master in 2004 and a Kennedy Centre Living Jazz Legend in 2007.

According to the New York Times, Hamilton is survived by a brother, a daughter, a granddaughter and two great-grandchildren. Incidentally his brother, Bernie Hamilton, was an actor, probably best known as a police chief in the 1970’s series Starsky and Hutch while his son Forest Hamilton Jr., was for a time vice president of Stax Records. Both predeceased Chico.