Chick Corea to play at the 2017 Cheltenham Jazz Festival 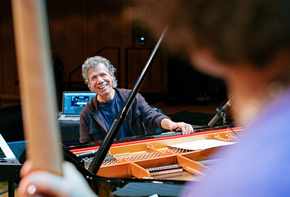 It’s been announced today that veteran keyboard maestro, Chick Corea,  will be one of the headliners at next year’s Cheltenham Jazz Festival (he’s scheduled to appear on Sunday April 30th accompanied by bassist Eddie Gomez and drummer, Brian Blade).  Although the full line up has yet to be announced and won’t be revealed until next year, it’s been confirmed that he’ll be joined at the festival by the Grammy-winning aggregation, Snarky Puppy,  as well as the formidable singer/songwriter  and bass maven, Meshell Ndegeocello.

Says the festival’s director, Ian George: “We remain focused on bringing a selection of the biggest, most exciting names in jazz to the UK and are therefore delighted to be welcoming Snarky Puppy, Meshell Ndegeocello and The Chick Corea Trio, for what will be the only UK date of their spring European tour, to the festival in 2017.”

Tickets for the Chick Corea Trio, Snarky Puppy and Meshell Ndegeocello go on sale to members on Wednesday 2nd November and to the general public on Friday 4th November.