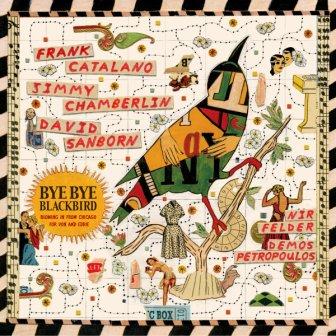 Frank Catalano is a Chicago-based jazz saxophonist who, despite being in the business for some 25 years, seems to be still oddly billed as “a young, up-and-coming, prodigy”!

Maybe his latest album will finally announce that “he has arrived”! The concise 6 tracker is ‘Bye Bye Blackbird: Blowing In From Chicago For Von And Eddie’ and as the title implies it’s an unashamed tribute to Chicago jazz maestros Von Freeman and Eddie Harris. Indeed the opening track is dedicated to Harris. ‘Chicago Eddie’ is a remarkable throwback to days of soul-jazz with a funky undertow and lashings of Hammond B3 (courtesy of Chicago’s Demos Petropoulos), while ‘Bye Bye Blackbird’ is the official tribute to Vonski. The tune was an almost permanent of his live shows.

Other tracks include a cover of Stanley Turrentine’s ‘Sugar’ (with a guest appearance from David Sanborn!) a version of ‘All Blues’ and a look at Etta James’ ‘At Last’, another soul-jazz triumph.

Frank Catalano’s’ Bye Bye Blackbird: Blowing In From Chicago For Von And Eddie’ is out now on Ropeadope Records.