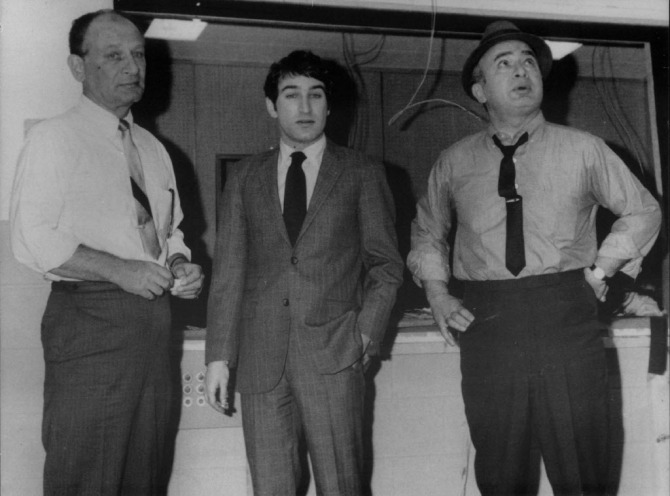 Phil Chess (pictured far right with his brother Leonard on the left and Leonard’s son Marshall Chess in the centre), one of the co-founders of arguably the greatest rhythm and blues record companies, Chicago’s iconic Chess Records, has died at his Arizona home aged 95.

Born in Motule, Poland, seven-year-old Fiszel and his elder sibling, eleven-year-old Lejzor Czyż (pronounced ‘Chy-zh’) followed their father to America in 1928  and ended up working in his Chicago scrap yard. But the brothers – who anglicized their names to Phil and Leonard Chess – had bigger ambitions and opened a liquor store in the south side of Chicago before purchasing a nightclub, the Macomba Lounge, in 1948. That led them to getting involved in the music industry and in particular rhythm and blues. Believing that there was money to be made by making records primarily aimed at the developing African-American market, they formed Chess Records in 1950. Signing influential musicians such as Muddy Waters, Howlin’ Wolf, Bo Diddley, Little Walter,  and Chuck Berry, Chess rapidly established itself as the house of blues in the 1950s. Before the ’50s had ended, Chess had already branched out into jazz, adding the Ahmad Jamal Trio to the company’s Argo subsidiary imprint.

In the ’60s, Chess moved into the emerging soul market with artists like The Dells,  Etta James, Laura Lee, Fontella Bass, Mitty Collier, and Marlena Shaw but one of their biggest selling acts of the ’60s was the Ramsey Lewis Trio, who served up infectious, finger-clicking platters of soul-jazz on the company’s Cadet label.

In 1969, the Chess brothers sold their company to GRT though they continued to be involved with its daily activities. Sadly, Leonard Chess died in 1972 and by this time, the label was going into a terminal decline. In 1975, an ailing GRT sold Chess to Joe and Sylvia Robinson’s New Jersey-based All Platinum company and later, in the ’80s, Chess was acquired by MCA, which was later absorbed into the Universal Music Group.

In founding Chess Records and bringing to the world’s attention many groundbreaking artists, Phil and Leonard Chess undoubtedly made a major and profound contribution to the cultural and musical history of America.

Ramsey Lewis posted on his Facebook page: “Phil and his brother Leonard were a great team. As the Ramsey Lewis Trio was first getting started, they signed us to a contract which eventually led to our first hit, ‘The ‘In’ Crowd.’ I remember while Leonard would be working more on the business side of Chess records, Phil would be upstairs with the musicians in the studio. He wasn’t a musician per se but during one session he told me, “play more of the high keys” (meaning the treble portion of the piano). After another take, we all realized that was just what was needed and it made the recording sound far better. After a long life, he will be greatly missed but his contribution to recorded music will never be forgotten.”