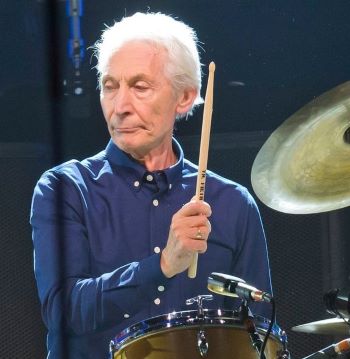 Rolling Stones’ drummer CHARLIE WATTS died today, Tuesday, 24th August. He was aged 80. Though no cause of death has been given, Watts had had emergency heart surgery just weeks ago.

Though of course, the Stones are rock titans, when they began in the early 60s they were an earthy blues band whose live act (and early recordings) were peppered with soul covers and indeed through their garlanded career they continued to cover soul classics like ‘Harlem Shuffle’ and ‘Just My Imagination’.

First and foremost though Charlie Watts was a jazz aficionado and as a teen it’s known he collected jazz 78s. His pro music odyssey began when his parents bought him his first drum kit when he was 13 . As he became proficient, he joined the pioneering blues band of Alexis Korner before joining Jagger and co in 1963.

Between his recording and touring work with the Stones, Watts regularly indulged his passion for jazz. In 1990 he produced an illustrated biography of jazz saxophonist Charlie Parker, entitled ‘Ode To A High Flying Bird.’ He subsequently used the book as the basis for a musical tribute to Parker  on an album by the Charlie Watts Quintet. It featured several of his jazz musician friends, including saxophonist Pete King. Watts also played and recorded with various jazz ensembles. At one famous gig at Ronnie Scott’s, he had a 25-piece on stage including three drummers.