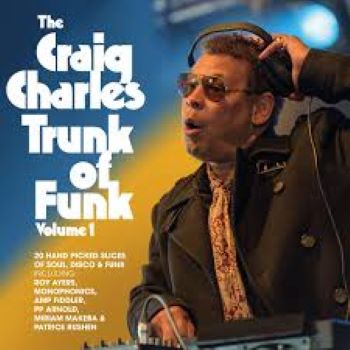 CRAIG CHARLES (yes, another genial Scouser!) is a true multi-tasker… actor, poet, TV presenter and, of course, acclaimed soul and funk DJ. Oddly, his Corrie character, Lloyd Mullaly, apart from being a taxi driver was also a DJ and with a pleasant serendipity, Craig took on (in real life) more and more DJ related activities. Drawing on his roots and passion for soul which he acquired growing up in Liverpool, he secured spots on BBC 6 Music and his ‘Funk And Soul Show’ quickly became one of that station’s most listened to programmes. That success prompted live gigs throughout clubland, and his shows were always sell out affairs. That in turn prompted his curatorship of a series of best-selling compilation albums in tandem with the Record Kicks label. If my memory’s correct, I think there were six or seven of them!

Now good ‘ole CC is back with a new compilation and because it’s on a new label for him the branding is subtly different, so please welcome… ‘THE CRAIG CHARLES TRUNK OF FUNK’.

Now the name may be different, but the concept’s much the same. The album features 20 soul and funk outings personally selected by the man himself, so all guaranteed to have that special raw, earthy, organic soul and/or funk flavour that is the man’s speciality.

The collection kicks off with an Aussie-sourced track – ‘Soul A Go-Go’ from the Soul Messin’ All Stars. This came out right at the start of the year and it’s generally acknowledged as the most accurate re-creation of the classic Northern soul sound in recent times. It’s energetic, pacey, raw and soulful and sets the tone for what’s to come. Amongst the other highlights is ‘Take A Shot’ from the Fantastics with Sulene Fleming on vocals.

The album also boasts plenty of classic oldies like Patrice Rushen’s ‘Forget Me Nots’ and Roy Ayers’ ‘Boogie Down’. The real bonus here though comes via two “exclusive cuts” – Amp Fiddler’s ‘Superfly’ and Oneness of Ju Ju’s ‘African Rhythms’ … both hard to find anywhere else.

And in another first for Craig, this ‘Trunk Of Funk’ will also come as a vinyl double album. It will be available from November 6th via Soul Bank Music and, it’s billed as Volume 1… so more to come!