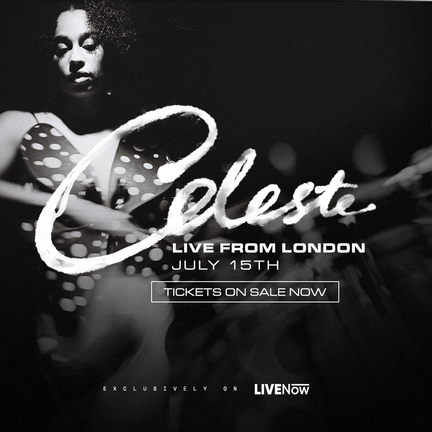 For those unfortunate fans who weren’t lucky enough to grab a ticket for BRIT Award winner Celeste‘s upcoming sold-out shows at London’s Union Chapel then the prospect of accessing a streamed film compiled from her five nights at the Islington venue is the next best thing to seeing the singer live.  ‘Celeste: Live From London’ will be available to stream on-demand from Thursday 15 July via LIVENow, a live entertainment platform, which was behind the concerts Dua Lipa Studio 2054 and Ellie Goulding At The V&A.

In addition to concert footage, ‘Celeste: Live From London’ will go backstage to offer the audience a glimpse of what happens behind the scenes and will also include interview segments, making the live experience a more immersive one.

Talking about the streamed concert film, Celeste says: “Connecting with people is one of the most important aspects of playing live. So, to now have the opportunity to not only play to a live audience after so long, but to also connect to all the music lovers at home, is amazing.”

She adds: “I can’t wait to play these shows in the beautiful London venue Union Chapel and be able to bring my first live show of the year to audiences who can’t be there in person, or just want to relive it, on the LIVENow platform. Being able to do both demonstrates how far we’ve come and I’m excited to see this be a part of live music in the future too.”