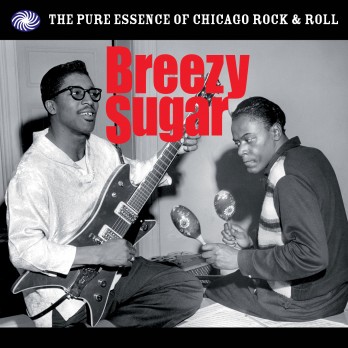 ‘BREEZY SUGAR’ is the latest archive compilation from specialist label, Fantastic Voyage. The 3 CD, 75 tracker is a look at the music of Chicago in the 50s and early 60s. Though the focus is Rock N Roll, the collection also includes plenty of raw, earthy, early R&B and embryonic soul.

The music features material from all of Chicago’s main labels – Chess, Vee-Jay and Mercury but there’s also plenty from the smaller indies like Buddy-Buddy, Falcon, Abner. Abco, Cobra and Chief. Equally, lots of big names are featured – Bo Diddley (who graces the cover), Betty Everett, Chuck Berry and The Coasters amongst them. But look out too for plenty of minor players whose few releases were just as important in the garlanded musical history of the Windy City

Collectors will delight to have material from people like The Big Rocker, Tobin Matthews, Louis Hobbs and The Dream Kings and as the set’s been compiled by music historian and record producer, Stuart Colman, then quality is guaranteed throughout.