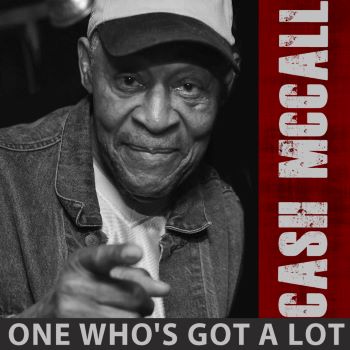 Soul and blues buffs will be familiar with the name CASH McCALL. Born Maurice Dollison in Missouri in 1941, he was to become a mainstay on the 60s Chicago soul scene. He played guitar, bass and sax; he wrote, produced arranged and performed solo. In the 60s and 70s He worked with plenty of big names including Otis Clay and Little Milton and recorded solo for Chess, Thomas Records (which was later to part-morph into Curtom) and the Jewel, Paula, Ronn record group. Being from the deep south, McCall’s music was always rougher than big city soul and as his career evolved, his music became much more blues based and for many years he was a popular ever-present on the blues circuit.

McCall died in April 2019, but January 29th 2021 would have been his 80th birthday and to mark the occasion, Nola Blue Records are releasing two special singles on the man. First up is ‘Blues Coming Down’ which was recorded in Los Angeles in 2015. It’s a tough, brassy blues opus with a band that features pianist Tennyson Stephens, bassist Welton Gite and drummer James Gadson.

The second “new” Cash McCall outing is a throwback to the golden age of Chicago electric blues, ‘One Who’s Got A Lot’. The track was recorded in two sessions in 2014 and 2015 but the atmosphere and vibe are pure 60s.

Both recordings will be available from the end of January.